Several lifetimes ago, in the mid-1980s, Bruce Hollinger, founder of Macola, travelled to the Chicago area to visit a $20 million dollar company that was using a mini-computer. They were interested in buying Macola. Ann Hayner worked in the accounting department and had some PC experience and was asked to assist. Suffice it to say that the implementation of a Novell LAN with Macola version 2 was so successful that it was 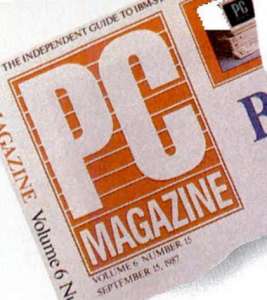 written up in a trade journal. This was bleeding edge technology back in those days of Lotus 1-2-3 and Word Perfect.

A couple years later Ann went from being an end user to an early business partner with Macola and worked with other fledgling Macola partners in the Chicago area. Fueled by several PC Magazine awards naming Macola as the #1 multi-user accounting system, the Macola community began to grow. The tiny reseller business also garnered several President’s Council awards. During this time, Ann visited with Bruce in Marion, Ohio many times for conferences. (You can see the first PC Magazine article about Macola here – starting on page 151.)

In search of a smaller, more manageable market to serve, Ann moved her family to Omaha, Nebraska and merged with another partner in the early 1990s. With the millennial impetus, many companies moved to the now “mainstream” platform of networked PCs using Macola. A very active Macola user group in Nebraska met regularly to share ideas and help each other. However, after the high water mark in 1999, and having helped over 150 companies to implement and use Macola, Ann sold her partner business and took care of an ill spouse for 18 months.

In 2001, Macola was acquired by Exact and Ann was re-invented as a freelance Macola consultant. She was introduced to Exact Synergy at an early point through one of her Omaha customers. Through the first decade of the 21st century Ann worked with Macola and Synergy users and became the President of the North American Synergy user group for several years. She continued to bump into Bruce at various Macola Engage conferences.

In 2004, Bruce Hollinger and his son Michael founded WiSys to develop real-time solutions for Macola. In 2010 Bruce invited Ann to join his team. They were launching a new product called Agility to complement their WMS and Business Object business lines. So Ann became part of the third-party community for Macola and embarked on the life of working at home for a “virtual” company.

Now in 2016, Ann is once again moving back to the end user side. She will be working with her brother’s business in Wisconsin. Roberts Irrigation implemented Macola in 1994 and are contemplating moving to Macola 10 and Synergy.

It appears that the circle is complete!